During the Japanese Invasion (1592 – 1598) the Palace was burned down, but not by the Japanese, but by disgruntled palace servants who wanted to destroy records of their employment there.

Drummer at Gyeonbokgung Palace in Korea

A group dresses up in traditional clothes to re-enact the open ceremonies that used to take place there. 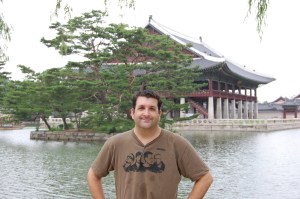