Seoul Tower overlooks all of Seoul. It’s quite an amazing view! 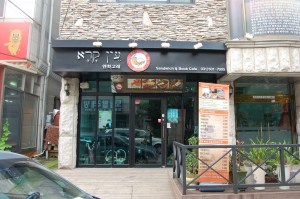 There’s this sandwich place about a block away from my apartment building. It has Hebrew letters on it. Maybe someone could translate it. I’m not sure what it says. Needless to say, my jaw dropped when I saw the Hebrew lettering. Meshugenah! (crazy!) Speaking of ‘crazy,’ the director at our school thinks the word crazy is a bad word. Sometimes it’s not easy explaining to Koreans that English words have more than one meaning. Our director does not want us using that word. They often take the literal meaning of a word. So, the kids use the word as do the teachers in a humorous way. Ross-teacher is crazy.

Oh, and tonight I ordered a double-ham and cheese on white bread. You’d think there would be plenty of ham in the sandwich, right? In NY or Los Angles you would expect a ‘stack’ of ham at a deli like the Carnegie Deli or Jerry’s. The middle of this sandwich was mostly lettuce. Oye! Do you know that the Koreans have an ‘oye’ sound for one of their vowels? They pronounce ‘oye’ much faster though and more harshly. Jews are a bit more nonchalant. Oye. 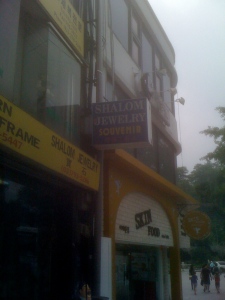 Koreans make loud sighs when they are disgusted with something…just like Jews. They’re all full of phlegm. They often spit into the streets…just like old Jewish men. It’s probably from all the cigarette smoking.

Last weekend I went to Itaewon. My last vlog entry, although the processing by You Tube didn’t do it justice, included a photo of a jewelry store called Shalom Jewelry. Shalom? Really?

One of the next stories I’ll be reading with my classes is titled, Where on Earth Is My Bagel? I copied the blurb off the official website. ‘No one knows how the idea of a New York bagel popped into Yum Yung’s head — perhaps it was inspired by a dream, or by listening to sparrows’ songs. Yum Yung lives in Korea where there are no New York bagels, and one day he just knows he has to have one. This timeless fable will make readers giggle with delight and satisfaction as Yum Yung, with the help of his friends, fulfills his bagel dream. The tale illustrates the power of perseverance.’ I have a dream too! In fact, I ordered a bagel from this sandwich place. It was not a bagel, but the bread was nice and soft. They do have good bakeries here. One bakery chain has a French theme. They make good croissants. 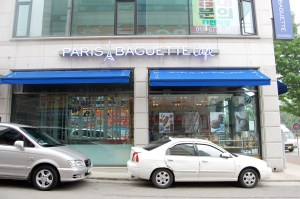