← Beauty Bar and the Beast
Ross in RAW Awards! → 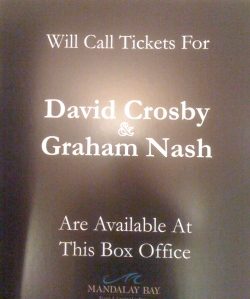 There’s no question who the men were entering the stage at the Mandalay Bay Theater on September 9. They may have been a part of other famous 60’s bands such as The Byrds and The Hollies, but David Crosby and Graham Nash of Crosby, Stills, Nash or CSN & Y (Young) have stood the test of time and expressed a solid stage presence. This dynamic two-time winning Rock and Roll Hall of Fame duo didn’t need lasers or flashy kaleidoscope backgrounds. It was all about their peaceful classic rock music, a homecoming of good vibes and a long time connection with fans. Fans sang with and without encouragement. Some fans clapped while others danced in the aisles.

The duo kept their sense of humor too. When one of the techs entered the stage to make an adjustment, Crosby joked that he’d better get it right or he’ll have to ‘go back to Neil’ (Young). After a fan shouted a request for “Almost Cut My Hair,” Crosby joked about the bald fan not having hair. Nash told the story of how a friend inspired him to write a song in twenty minutes before he left. “Just a Song Before I Go” is about leaving loved ones behind before going back on tour.

The supportive musicians were excellent. James Raymond, the keyboardist, played in rock and R & B bands in his teens before discovering his birth father, David Crosby, in the mid-90’s. Not only have father and son reunited, they’re now playing and touring together. “Don’t Dig Here,” written by Raymond, is about keeping nuclear waste out of the Yucca Mountain in Nevada. No nukes!

Crosby and Nash made everyone feel at home with classics; “Teach Your Children,” “Wooden Ships,” “Our House” and The Byrds “Eight Mile High.”

I'm a screenwriter, filmmaker, video editor and copywriter. I grew up in NY, but lived in Los Angeles for roughly 29 years. I produced, co-wrote and co-directed feature film, “Rubbernecking.” In 2008, I edited “War of the Worlds 2: The Next Wave” directed by and starring C. Thomas Howell. I was the founder and festival director of Social Media Film Festival. I love live music, comedy, iced-blended mochas and movies of course!
View all posts by Rossman In Your Head »

← Beauty Bar and the Beast
Ross in RAW Awards! →