← A Million in Won: So Many Places, So Little Time
What Are They Wearing? →

My flight from the U.S. arrived in Seoul, South Korea, on May 27th, 2010. My Mom decided to send me a follow-up package of things I could use and may not find in Korea right away. The main purpose for the package was for a small bottle of prescription that held a 3 month supply. I have to watch my high cholesterol and triglycerides. Not a big deal…unless you’re sending it to Korea.

My insurance company allows a 3 month tourist supply, but I had to acquire permission from my doctor. Three months doesn’t cover a year supply, but at least I would have it a while longer. I could possibly spread out the days I take it.

Other items in the package;

My Mom was concerned that I may not find some items easily. Mom was just being, well, Mom. It’s not like I was going away for camp.

Anyway, so Mom mailed this package on June 3, 2010. The package weighed 6 pounds. If all was fine I would have seen the package in about ten days at the most. The package was mailed through Federal Express and was being mailed directly to the school.

So, the package arrived…at FedEx about ten days later which is expected. I spoke to my parents and they said that the package arrived, but had to go through customs. They also told me that someone would be contacting me through email or my cell phone.

A few days later I received an email from a FedEx representative. I emailed back with the tracking # and where the package is to be dropped off. I wanted the package to be dropped off at the address written on the package, my school. The mailboxes at our apartment building are not trustworthy as Moniqa, one of the teachers, stopped receiving mail there. The mail simply ceased to arrive without any warnings or notices. After living there for a while I’d believe that. After all, our landlord is believed to be dead. 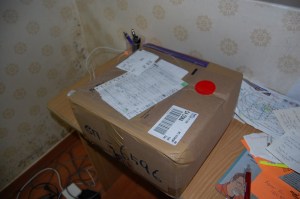 Anyway, back to our story. A few more days passed and I decided to call the FedEx office from school. I spoke to someone and left a message for them. Jake, the Korean American teacher, became a mediary. Jake told me that I needed to have my information handy regarding the prescription. They wanted to know my doctor’s name and phone number. Federal Express also wanted to know the pharmacy’s phone number as well. I emailed that information to the contact I had.

A few days later, Jake informed me that I needed to bring in the prescription bottle so one of the Korean teacher’s could verify and give that information to FedEx. Done.

No, we’re not done. Days later Jake told me that customs may run some tests that could take another ten days. What? What tests? They’ve made those phone calls to my pharmacy and doctor’s office and still don’t trust that it’s prescription.

FedEx then asked me who the people were that sent me the package. Well, let’s see, they raised me, sent me to college and watched me play ice hockey. Oh, yes, they have the same last name. Maybe they’re oh, I don’t know, MY PARENTS! Do they think my parents are in on the drug deal too? What a great cover!

So, a few more days pass. Jake gets a call from FedEx. The prescription is fine. Now they want to know the cost of the few plastic silverware items. What? Are you serious? Really? Really?

At this point my concern was that the package would arrive after I have left South Korea and headed back to the U.S. because the few leads I had were not panning out.

I got on the phone with the FedEx guy and told him:

The guy on the phone pleaded with me that it was very easy at this point. All I had to do was pay the shipping or customs or international tax, something. I finally caved in and said ‘Fine. I’ll pay the tax.” That’s all FedEx really wanted.

I think I told him $4 for the plastic silverware. They probably cost less then that.

Jake found out how much the taxes were. I paid him in won because I didn’t have a bank account yet. (I would have a had a lot of things like a foreign registration card, health insurance and a South Korean cell phone if I knew I was staying in SK.)

Jake took care of paying FedEx.So, for the next many days, possibly a week went by, I’d ask the Korean teacher if my package arrived. No package.

So, that was a lesson to me and let it be a lesson to you. If you can get your 3 month supply ahead of time before leaving pack it into your suitcase or do without it.

I decided a few days later to use the same package to send back a bunch of resource books on ESL and screenwriting. I had an overweight fee on my luggage when I left the Las Vegas airport to fly to Seoul. I thought I would lighten my load on the way back. The package will take a long time to go back to Vegas as I paid for the cheapest way…by boat which could take from 2 weeks to 2 or 3 months. I’ve been in Vegas for one week as of today, Monday, July 19th. Stay tuned to find out when the package will finally come home.

I'm a screenwriter, filmmaker, video editor and copywriter. I grew up in NY, but lived in Los Angeles for roughly 29 years. I produced, co-wrote and co-directed feature film, “Rubbernecking.” In 2008, I edited “War of the Worlds 2: The Next Wave” directed by and starring C. Thomas Howell. I was the founder and festival director of Social Media Film Festival. I love live music, comedy, iced-blended mochas and movies of course!
View all posts by Rossman In Your Head »

← A Million in Won: So Many Places, So Little Time
What Are They Wearing? →